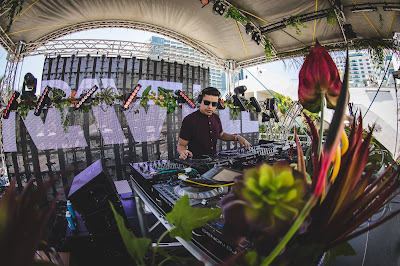 LA based DJ and producer Richard Garcia, better known as Ravell, returns with a sweet collaboration done together with LondonBridge feat. Kaleena Zanders and it's the perfect track to kick start your weekend. "Before I Go" is a proper house tune with all the bells and whistles, oozing with good vibes and a contagious rhythm. The fat bassline on this track is going to trigger the inner dance-center of your brain, making it impossible for you to stand still...there...I warned you! Personally, I really like the "back-to-the-roots" style the two producers went with here. Despite the drop being very much aligned with modern-day house music, they put in a lot of effort to create a serious tribute to the style of the late 90's/early 00's, with gospel style vocal and all. With both artists deeply rooted in the scene, the diverse set of influences they combine on this track will leave you speechless...but not motionless.

What Ravell had to say about the release, the process of making the track and more, you can read below in the mini interview we did with him recently:


How did the collaboration with LondonBridge happen and what was the process like?

-I met LondonBridge by being involved in the club scene. I remember playing at a club one night and someone introduced us. I thought, “this guy is the friendliest guy here,” and we’ve kept in touch ever since. We met up in the weeks to come and eventually ended up in the studio together. The process was almost seamless and organic, which is sometimes rare in the studio.

How would you describe “Before I Go”?

-Before I Go takes you on a journey to move forward to a better life, a better perspective and to leave behind the unfulfilling.

Being part of Kaskade’s team for a long time, how has he influenced your style as a producer and who else inspires you creatively?

-Being able to have Kaskade not only as a mentor, but a really good friend has played a huge role in my career. One thing he’s always mentioned is that if I ever put out anything, to make sure it’s “memorable”.

Will we see/hear more original pieces from Ravell in the near future? What’s in the pipeline?

-Of course! In 2019, I will be sharing a ton of new music that I am extremely excited about.

Where can your fans see you next?

-Rumor has it that I will be playing a few shows in North America & potentially Mexico. You can keep a close eye on ravellmusic.com.